FRCs are resin-based materials and contains fibres to improve their physical properties and are introduced in the 1960’s. The strength of the fibre bond is very similar to the strength of cobalt chrome material. However, fibre bond is not rigid and its elasticity is similar to that of dentin. With this technique, the enamel of the anchor teeth remains intact and not damaged. 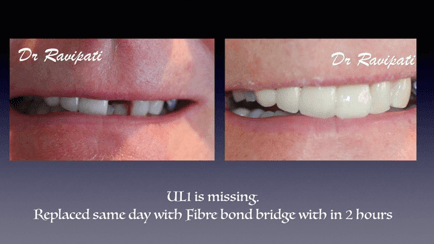 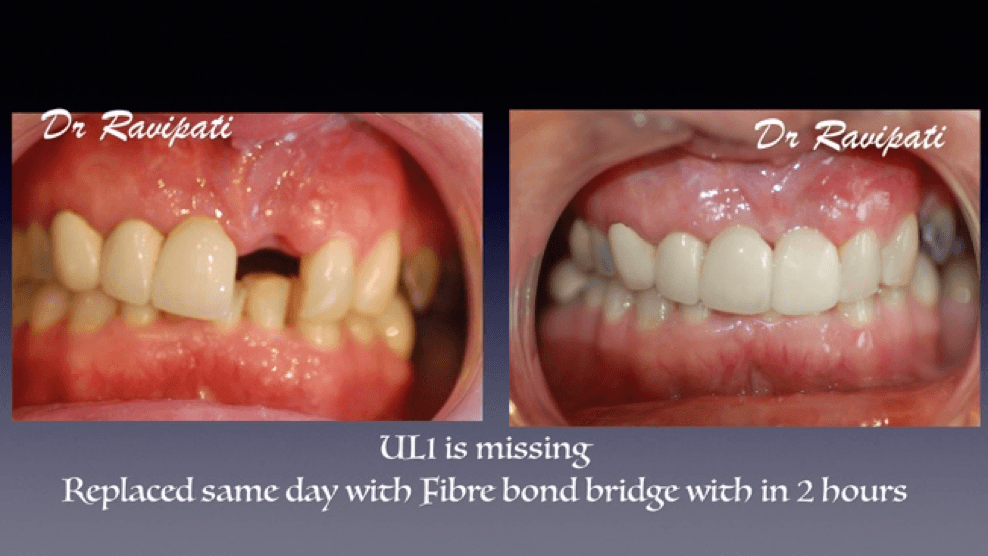 1. Removable partial denture (RPD): Is considered often as treatment of choice but lack of compliance in appliance wear and care is the greatest limitation.
2. Porcelain fused to metal prosthesis(PFM): This is delayed until gingival margins are stable and also rigid fixation of two teeth will lead to retardation of growth between the two teeth.
3. Bonded Maryland bridge: Routinely used but unaesthetic appearance due to metal wing behind the adjacent tooth. The bond strength between metal and enamel is low.
4. Cantilever bridge: Additional torsional forces are created on the abutment teeth.
5. Dental Implants: Need to wait until the growth period is completed and is very expensive.

Therefore, FRC bridge is a good alternative to above conventional treatment options that are routinely used to replace a missing anterior tooth. Instead of the traditional bridge which involves irreversible tooth loss, FRC is a minimally invasive cost-effective technique to replace missing tooth.

In this technique, a fibre bond is used as a frame which joins the teeth adjacent to the missing tooth. A tooth coloured composite is placed over this fibre frame and the tooth is built over this frame to resemble natural tooth.

How long does FRC lasts?

These bridges can last for many years with a mean survival period of 3-4.5 years

Where can FRC be used?

1. A good alternative to conventional treatment options in replacing a missing permanent anterior tooth which is lost as a result of dental disease.
2. Trauma in children which leads to loss of tooth and where dental implants are not recommended before the end of the growth period.

This website uses cookies to improve your experience while you navigate through the website. Out of these cookies, the cookies that are categorized as necessary are stored on your browser as they are essential for the working of basic functionalities of the website. We also use third-party cookies that help us analyze and understand how you use this website. These cookies will be stored in your browser only with your consent. You also have the option to opt-out of these cookies. But opting out of some of these cookies may have an effect on your browsing experience.
Necessary Always Enabled
Necessary cookies are absolutely essential for the website to function properly. This category only includes cookies that ensures basic functionalities and security features of the website. These cookies do not store any personal information.
Non-necessary
Any cookies that may not be particularly necessary for the website to function and is used specifically to collect user personal data via analytics, ads, other embedded contents are termed as non-necessary cookies. It is mandatory to procure user consent prior to running these cookies on your website.
SAVE & ACCEPT